２４−１ The Birth of the universe：Quantum fluctuation [1] [2]
・In modern physics, there is no such thing as perfect nothing.
・Vacuum or empty space has Vacuum energy and tension．
・In quantum level, even in a vacuum, pairs of matter and anti-matter particles are constantly being created and annihilated.
・The universe was born by the rapid expansion of the quantum fluctuation. 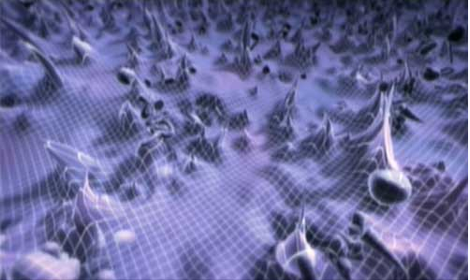 ※The problem remains.・・・ What is the vacuum energy?

２４−２ Inflation cosmology [4]
・・・1981 Katsuhiko Sato, Alan Guth
・The theory is that the universe is the magnitude of 10＾24-th power（＝Inflation） in the period from after 10 minus 36 square seconds immediately after birth until after 10 minus 34 square seconds by the phase transition of space due to the Quantum tunneling of vacuum energy.
※The size of the universe (10^-27m) is much smaller than atom (10^-10m).
⇒3 millimeters (10^-3m)
※The inflation rate is 60-fold of light speed.

○The driving force behind this inflation has been said that the energy that was released during the phase transition of the vacuum. [5]
○In early inflationary models, the phase transition of the vacuum was considered that it is generated by the Quantum tunnelling or tunnel effect. However, in a model named new inflation or slow-roll inflation, instead of tunneling out of a false vacuum state, inflation is considered that occurred by rolling down a potential energy hill. [5]

※Quantum tunnelling or tunneling refers to the quantum mechanical phenomenon where a particle tunnels through a barrier that it classicallycould not surmount. It has important applications to modern devices such as the tunnel diode,[2] quantum computing, and the scanning tunnelling microscope. [6]
※Nuclear fusion is also thanks to the tunnel effect. Without the tunnel effect the sun can not shine. [7]

・Huge energy is converted into heat. And it will be the whole universe to the ultra high. ⇒ Big Bang 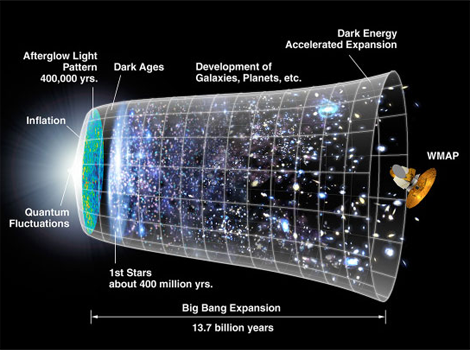 • By inflation, some of the problems of big bang cosmology, which has been pointed out in the 1970s is resolved. [4]
(The problems of big bang cosmology )
1−That the universe is observed is very flat. (Flatness problem)
2 −The universe is extremely uniform. (Horizon problem)
3−Phase defect of space in which exist in many models of grand unified theory (GUT) has been predicted is not observed at all. (Monopole problem)

・Precision exploration of gravity waves is planned by such as Planck(cosmic microwave background radiation observation satellites of the European Space Agency (ESA) ) or the South Pole satellite. [8]

・In February 2016, the Advanced LIGO team announced that they had detected gravitational waves from a pair of black holes merging. [9]
・Institute for Cosmic Ray Research, University of Tokyo starts the observation of gravitational waves in 2017 by the underground telescope "KAGRA".
・In the 2021 fiscal year, Japan plans to launch the artificial satellite "Light Bird" which is possible all-sky observation with high degree accuracy.

２４−３ Free lunch model（Alan Harvey Guth）[8]
・・・1988
・Matter and radiation can have not only "positive" energy but also "negative" energy.
・Negative energy is repulsive force, and repulsive force inflates the space.
・When "negative" energy is generated by quantum fluctuations, "positive" energy of the same amount is also generated.
• Thus, in the closed universe, material and radiation is filled accoding to the expansion!
・This is perfectly consistent with the Law of Conservation of Energy, so the Expansion of the universe is the ultimate Free lunch.

・Guth’s model is believed to explain the cosmological constant of General relativity.

２４−４ The Big Bang model [10]
・・・1948 George Gamow
The model is assumed that the Universe expanded from a very high density and high temperature state.

・The Big Bang model is explained by Cosmology based on theory of elementary particles.

・Elementary particles are explained by several kinds of symmetry in theory of elementary particles.
・Although it is assumed that there is an equivalent amount of matter and antimatter in the universe from this, there is not much antimatter to be found. Something must have happened to tip the balance.

・One of the greatest challenges in physics is to figure out matter and antimatter asymmetry.

☆My idea
Since the fundamental power of antimatter is repulsive force, it is thought that antimatter was diffused at high speed rather than the substance after separation of gravity and antigravity (１０Ｅ−４４（ten to the minus 44th） second after the Big Bang).