• The non-human animals try desperately to live until the last minute.
・Your body also wants to live.
・But why there would be persons who commit suicide？

・When I thinking about that on the home of the station while in the time of a little depressed feeling, sometimes I feel fear that I might jump on impulse into the running train.
・My body does not hope I would die. My families do not think such a thing even dream of. Some people who might get annoyed by suicide do not expect such a thing.

・I know, my heart at such time is small.
・Therefore, if I die then, I will die with the small heart.

・Probably it is doing of a brain and the developed frontal lobe.

・The mechanism of dying if people's mind becomes small.
・Why is there such mechanism？

・The reason for having made specially the mechanism "die if it becomes small"
・Although it seems that it is cruel ...
・It may be a message "grow up greatly" from the universe.

○Data
Over 800,000 people die due to suicide every year. 79% of global suicide occurred in low- and middle-income countries. Suicide was the second leading cause of death among 15-29 year olds globally in 2016. 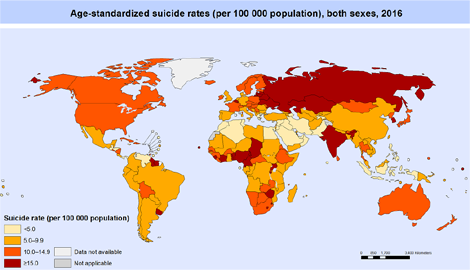