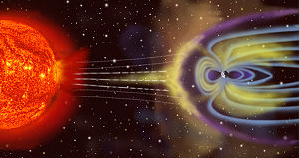 ７８−３ Mitigation of Cosmic Radiation
○Alpha (α) radiation is stopped by a sheet of paper. Beta (β) radiation is halted by an aluminium plate. Gamma (γ) radiation is eventually absorbed as it penetrates a dense material(Concrete with a thickness of 50 cm, in the case of lead 10cm). Neutron (n) radiation is blocked by light elements, like hydrogen, which slow and/or capture them. [8]
○Aggressive shielding measures in the ISS is not taken.
← Since the launch cost of screening agents is significant.

７８−４ Space Weather
○Military, aviation and space agencies like the FAA and NASA pay close attention to space weather and may publish advisories. To keep up to date on your space weather, the National Oceanic and Atmospheric Administration (NOAA) provides an online service. [1]