１１ The Birth and Life of Stars #universe #life１１－１ The Birth of StarsIn the universe, Stars are born from chaos.Stars and intelligence are being born while increasing the entropy.※ entropy: the degree of disorder※ law of entropy increase: the laws of increasing of disorder in the universe 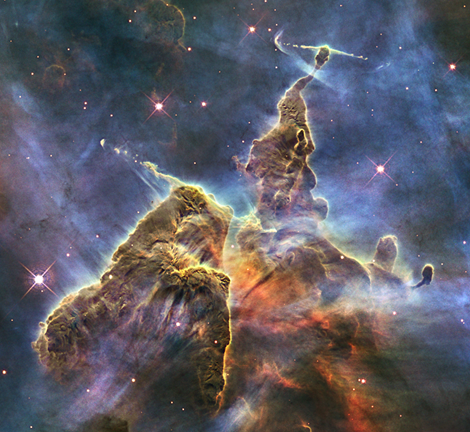 ※The Carina Nebula (7,500 ly)  (c)NASA,ESA,and M.Livio and the Hubble 20th Anniversary Team(STScI)１１－２ Life of Stars○Big star burns out faster than small one. （Since stars have a limited supply of hydrogen in their cores, they have a limited lifetime as main sequence stars. This lifetime is proportional to f M / L, where f is the fraction of the total mass of the star, M, available for nuclear burning in the core and L is the average luminosity of the star during its main sequence lifetime. Because of the strong dependence of luminosity on mass, stellar lifetimes depend sensitively on mass.）・The Life and Death of Stars NASA○The lifetime of the sun is about 100 million years. The life of stars of 10 times weight of the sun is from 1 / 1000 to 1 / 100.○The Sun formed about 4.6 billion years ago. It will exit the main sequence in approximately 5 billion years and start to turn into a red giant. [2]・Sun －Wikipedia：https://en.wikipedia.org/wiki/Sun#Life_phases【Change log】20180913 Organize diagram