(Ｖ: Motion speed, Ｃ：Light speed)○At the system which exercises, compared with an external system, only is delayed in time.

2. General relativity [Electromagnetic force ＋ Gravity]：Theory of gravity and space-time about the macro world such as the movement of the stars and the structure of the galaxy. （1915 - 1916）• This theory described that gravity is generated by distortion of spacetime by mass.・It is the extended equation of the Newton's law of universal gravitation, so that it can be applied to the strong gravitational field . By substituting the material and energy density such as a star on the right side, it is possible to estimate the curvature of the space-time around the star.・Genera relativity can properly describe phenomenon(ex. exercise close to light-speed, or movement in a large gravitational field of such a black hole) more than Newtonian mechanics.・Generally relativity predicts that black hole is formed where large mass is concentrated in a limited space.○ Einstein’s equation: If you assign the mass of the material such as a star or energy in the right-hand side, it is possible to calculate the curvature of space-time around the star.Ｇμν＋Λｇμν＝κＴμν※ Left-hand side: Curvature of space-time (Geometrical quantity representing the bending of space-time)：Total energy of the galaxy※ Right-hand side: Density of matter and energy (causing a gravity) that exist in the universe ⇒In the flat universe of curvature zero, the total energy for the entire galaxy becomes zero.＝In the flat universe, the sum of the negative energy due to gravity (repulsion) and the positive energy(kinetic energy) is zero.・Ｇμν：Einstein tensor（Tensor represents the distortion)・Λｇμν ： The cosmological constant・κ ：Einstein's constant of gravitation（κ＝８πＧ／ｃ＾４ （π：pi、Ｇ：Gravitational constant、c ：Speed of light））  ※ｃ＾４：raise c to the 4 power・Ｔμν：energy-momentum tensor・μ, ν: Identify the coordinates of space-time.○As astronomical phenomena were discovered, such as the 3-kelvin microwave background radiation (1965), pulsars (1967), and the first black hole candidates (1981), General relativity explained their attributes, and measurement of them further confirmed the theory. 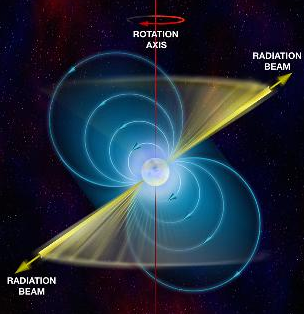