○Creation is work which extracts a significant thing out of assumption which exists infinitely.
・In order to create efficiently, a network with various intellect objects and construction of communication are required.

○ Network Power - Anne-Marie Slaughter (1958-)
・In 20th century, the country that connect the most world is the strongest.
・It is the next game.
1) How to tie with most of other actors.
2) How to organize them and produce maximum effect.
・In the network power is spread, the society which is rich in flexibility and adaptability is the most advanced society.
・From the point of view of diversity, it is important that society is open.
○To enhance the creativity
【Reference】「僕がアップルで学んだこと」松井博（２０１２年４月刊）
(1) Simple-minded (p.042)
・Minimization of rules to protect (p.047)
・Put a hand from where it can be organized. (p.048)
・・・Always tidy. (p.111)
・・・Preparation and execution and cleanup (p.116)
・・・Successful experience, failure experience, honor greed and sense of inferiority let throw away as soon as possible. (P.204)
・・・Clarify the "do it" and the "can not do it". (p.049)
・・・Do not ask for excessive quality. (p.084)
・・・Know the strengths and weaknesses. (p.051)
(2) Defines the clear concept, and design along the definition. (p.055)
・Product development without emphasis on design and concept is easy to structurally cost bulge. (P.076)
(3) Appropriate constraints (p.124)
・・・Too much leeway, creativity fades. (p.128)
・・・Since held liable person becomes seriously. (p.121)
(4) Other
・A new idea is born when old idea is abandoned. (p.125)
・Put out a lot of ideas. (p.128)
・Connect the multiple idea. (p.126)
・Ask for the explain until easy to understand.
・Change the rhythm. (p.128) 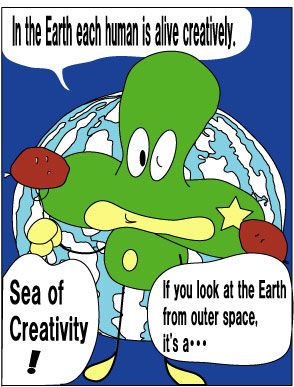 [History of the network]
1965 Theodor Holm Nelson (1937-, US sociologists) made the word "Hypertext" and "Hypermedia".

※ Hypertext is a mechanism for associating a plurality of documents (text) to each other. I was named "hyper-text" in the sense that "more than the text." We say a hyperlink that ties between texts.
※ The most famous of hypertext implementation is World Wide Web.