○The center of The Big Bang ：Only we know that the universe is accelerating expansion, we can not indicate where the center. [1]

○Evidence of the Big Bang
1) Redshift ... All the galaxies are moving away from us.
※ Redshift： Phenomenon that the spectrum of the light from the observation target (including electromagnetic waves of all wavelengths not only visible light) shifts long wavelength side (closer to the red in the visible light). [2]
2) The cosmic microwave background radiation (CMB) ... It had been predicted by the Big Bang theory.
※Phenomenon that microwave spectral 3K (the remnant of the Big Bang) is observed from all directions on the celestial sphere.
3) The presence ratio of light elements in the universe ... Prediction of the presence ratio of the light elements such as hydrogen and helium. 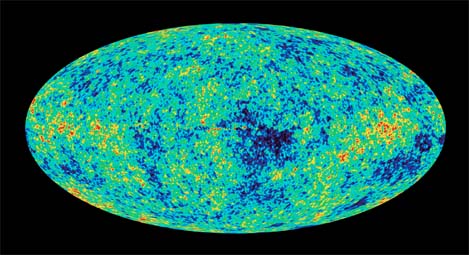 ○The problems of big bang cosmology
• By inflation, some of the problems of big bang cosmology, which has been pointed out in the 1970s is resolved. [3]
1−That the universe is observed is very flat. (Flatness problem)
2 −The universe is extremely uniform. (Horizon problem)
3−Phase defect of space in which exist in many models of grand unified theory (GUT) has been predicted is not observed at all. (Monopole problem)