８１−１ Black hole [1]
○Black hole is a "hole" opened in space-time.
○In the case of a charged or rotating black hole, it is possible to avoid the singularity.
・Extending these solutions as far as possible reveals the hypothetical possibility of exiting the black hole into a different spacetime with the black hole acting as a wormhole.
・The possibility of traveling to another universe is, however, only theoretical since any perturbation would destroy this possibility. 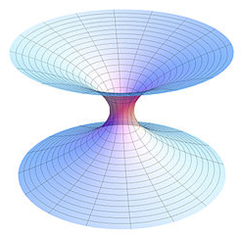 ※Conceptual diagram of a wormhole [2]

○Penrose diagram [3]：It introduces a system of representing distant spacetime by shrinking or "crunching" distances that are further away. Penrose diagrams are useful in the study of asymptotic properties of spacetimes and singularities. 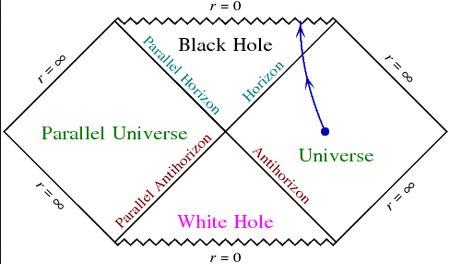 ８１−２ How to make wormhole [4]
・Rotate the white dwarfs in the form of a ring, creating a vortex (wormhole) in space.
・Injecting a negative energy in the vortex to stabilize the wormhole.

※To create a wormhole diameter 1 m, it is necessary to convert the same mass of Jupiter to negative energy. [5]

☆First of all, we need to find a white dwarf that rotates in a ring shape.

８１−３ How to find the wormhole [5]
・When it comes to wormhole hunting, said Nagoya University astrophysicist Fumio Abe, looking for the distant signatures of smaller gravitational lenses, called microlenses, is the way to go

・Unfortunately, these impromptu wormholes would be super small, appearing at the Planck scale. That’s about 10-33 centimeters long. In other words, the wormhole would be so small that it'd be almost impossible to detect. [6]

・The Penrose diagram above is the maximally extended Schwarzschild black hole solution in a flat space (Euclidean space) close to our universe, but a similar figure can be drawn also in anti-de Sitter space (Ads). [8] 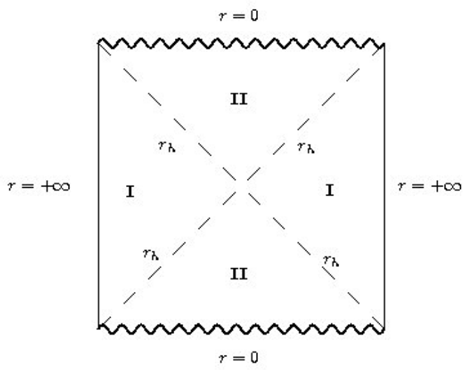 ・In the penrose diagram of anti-de Sitter space (Ads), we can set a plane that can be described by t Quantum Field Theory (CFT) at the boundary between the two space-time across the wormhole.
• This plane is in quantum entanglement state via the wormhole. [9]