１８ The Big Bang Model #universe #BigBang ：The Big Bang model is the cosmology to which it is supposed that the universe began large expansion suddenly from one point extraordinarily smaller than one atom about 13,700 million years ago. ・It is 1/10 billion seconds after the Big Bang that materials which constitute the universe, such as nuclear particles (proton and neutron) and an electron, were produced. (←separation of electromagnetic power and weak power) = birth of the fundamental power of the universe.※The fundamental interaction of the universe（ The four forces of nature）１ Electromagnetic power ： power which connects a proton and an electron (a chemical reaction is based on electromagnetic power)２ Strong interactions： power which combines a proton and a neutron (Nuclear force)３ Weak interactions：power to which the radioactive decay of the neutron (β disintegration)４ Gravity○The center of The Big Bang ：Only we know that the universe is accelerating expansion, we can not indicate where the center. [1] ○Evidence of the Big Bang1) Redshift ... All the galaxies are moving away from us.※ Redshift： Phenomenon that the spectrum of the light from the observation target (including electromagnetic waves of all wavelengths not only visible light) shifts long wavelength side (closer to the red in the visible light). [2]2) The cosmic microwave background radiation (CMB) ... It had been predicted by the Big Bang theory.※Phenomenon that microwave spectral 3K (the remnant of the Big Bang) is observed from all directions on the celestial sphere.3) The presence ratio of light elements in the universe ... Prediction of the presence ratio of the light elements such as hydrogen and helium. 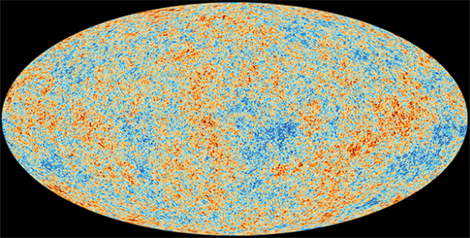 Photo: Temperature fluctuations of the cosmic microwave background radiation. (Appearance of the universe after about 40 million years of the Big Bang)・ESA > Our Activities > Space Science > Planckhttps://www.esa.int/Our_Activities/Space_Science/Planck/From_an_almost_perfect_Universe_to_the_best_of_both_worlds○The problems of big bang cosmology• By inflation, some of the problems of big bang cosmology, which has been pointed out in the 1970s is resolved. [3]1－That the universe is observed is very flat. (Flatness problem)2 －The universe is extremely uniform. (Horizon problem)3－Phase defect of space in which exist in many models of grand unified theory (GUT) has been predicted is not observed at all. (Monopole problem)【References】1. Big Bang －Wikipedia：2.edX／COSMOLOGY／Section 1: Space and Time／Worked Example 1”Measurement of redshift”https://courses.edx.org/courses/ANUx/ANU-ASTRO4x/1T2015/courseware/4cf3892023314c59b175176b7d3ac179/d308a3640e2e479bb34dbc623ac88568/※ edX: Free online course of Harvard University and Massachusetts Institute of Technology (MIT) (registration required)3. Wikipedia：Inflation(cosmology)